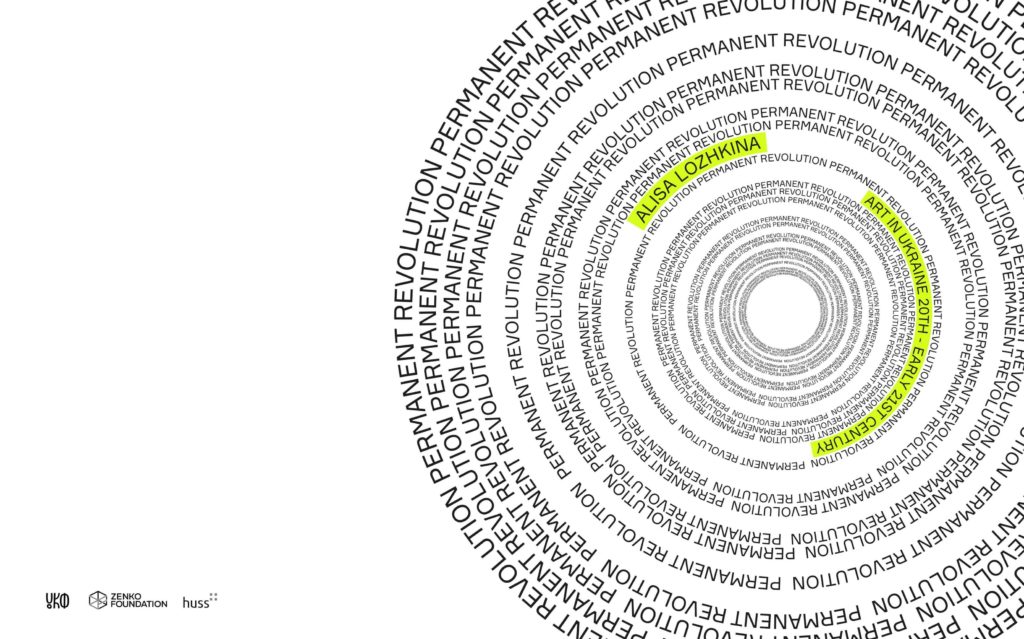 ODESA: FROM NONCONFORMISM TO CONCEPTUALISM

Odesa’s art scene was as interesting as the one in Kharkiv. From the 1950s to the 1970s, Odesa had perhaps the most full-fledged unofficial scene in all of Ukraine, with its own exhibitions, intellectual clubs, and collectors. Oleh Sokolov, an artist who broke from figurative art in its traditional sense and created truly alternative “proto-conceptualist” pieces, worked there from the end of the 1950s. By the late 1960s, a community of unofficial artists had emerged in Odesa, headed by the likes of Valentyn Khrushch, Yurii Sychov, Liudmyla Yastreb, Oleksandr Anufriiev, Lucien Dulfan, Viktor Maryniuk, Volodymr Strelnykov, Volodymyr Naumets, Valerii Basanets, and others.

An artistic phenomenon particular to that time was the “apartment exhibition.” In the middle of the 1970s, hundreds of events of this kind took place in Odesa and formed the backbone of the city’s unofficial scene. Odesa’s free port spirit resisted any kind of sectarian self-isolation, as demonstrated by the city’s nonconformist art scene of that period. In Odesa, the doors of apartment exhibitions were open to all, welcoming not only chosen like-minded members of the art community, but also numerous random guests and viewers.

In the summer of 1967, long before Moscow’s “bulldozer exhibition” of 1974, the duo Sychyik+Khrushchik, made up of the artists Stanislav Sychov and Valentyn Khrushch, arranged the first nonconformist “fence exhibition.” The three-hour period when the artists’ work was hung on the fence of the Odesa Opera Theater became an important moment in the history of Ukrainian unofficial art.

“It was more of an ethical and aesthetic protest, rather than a political one. And this was how the Odesan nonconformists differed from the Moscow avant-gardists. The latter’s ‘bulldozer exhibition,’ organized by Oscar Rabin, thematically waged war against ‘Sofia Vlasyevna,’ the name given to the Soviet authorities by Muscovites afraid of wire taps. Khrushch and Sychov, on the other hand, were not fighting anyone. They upheld their own sense of personal integrity, and asserted their right to sincerity and purity in art,” writes Yevhen Holubovsky, the Odesan culturologist and witness to that legendary time.

However, the artistic experiments within this community were mainly limited to “catching up” with modernist painting. The majority of its members were interested in purely aesthetic exploration and, in contrast to the Moscow unofficial scene, were extremely apolitical.

A true counterculture only really appeared in Odesa in the early 1980s, when a group of young artists gathered in the city armed with a new set of intellectual and aesthetic reference points. From the beginning it wasn’t a single group, rather a constellation of acquaintances who were divided up according to their interests, but who had, for a short while, worked in a similar style. They included Serhii Anufriiev, Yuri Leiderman, Ihor Chatskin, Volodymyr Fedorov, the Pertsi group (Oleh Petrenko and Liudmyla Skrypkina), Larysa Rezun, and Dmytro Nuzhyn. As the oldest of the artists, the group’s unspoken leader became Leonid Voitsekhov. It all began with their apartment exhibitions, put on in the spirit of the European Fluxus group. 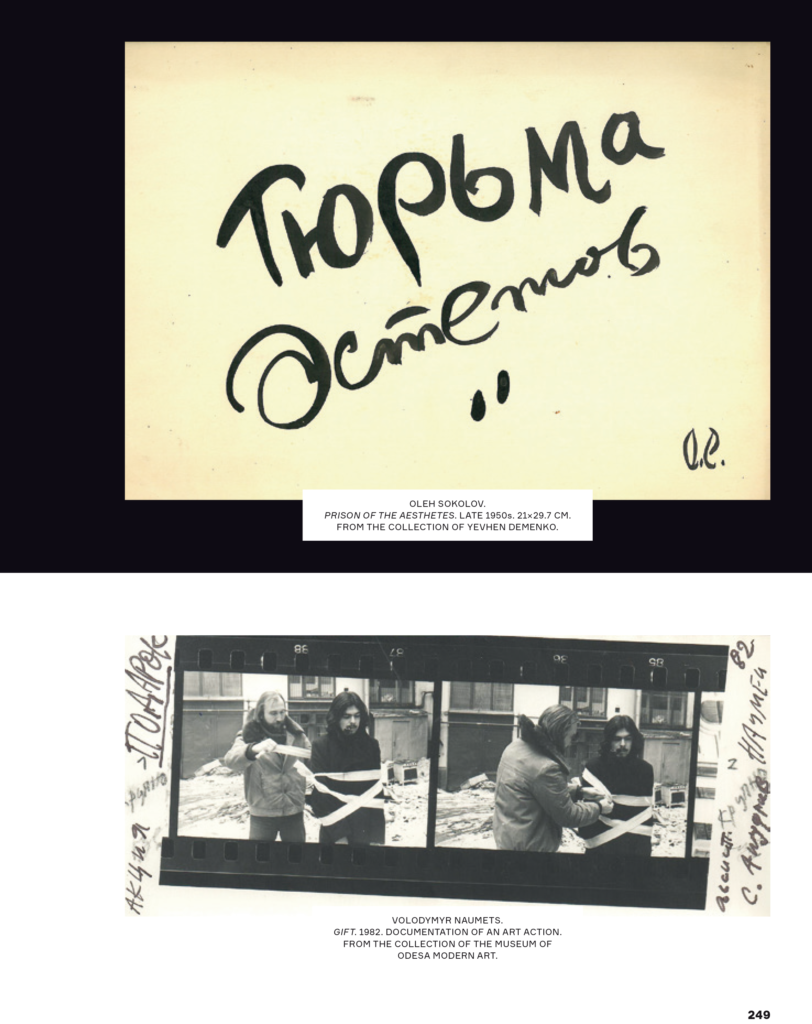 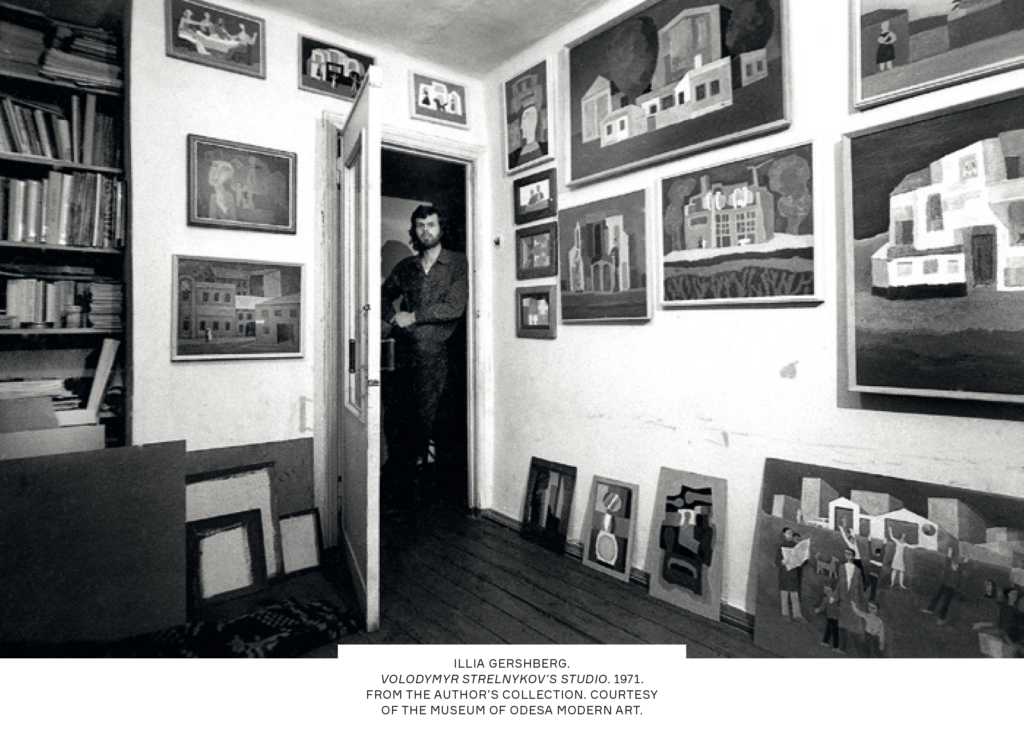 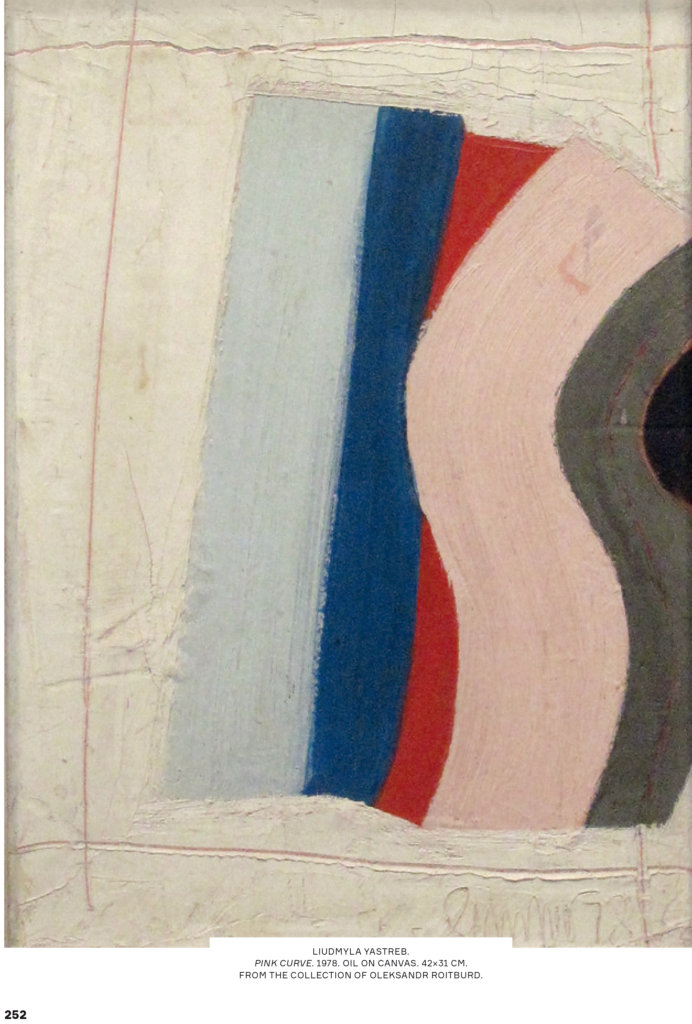 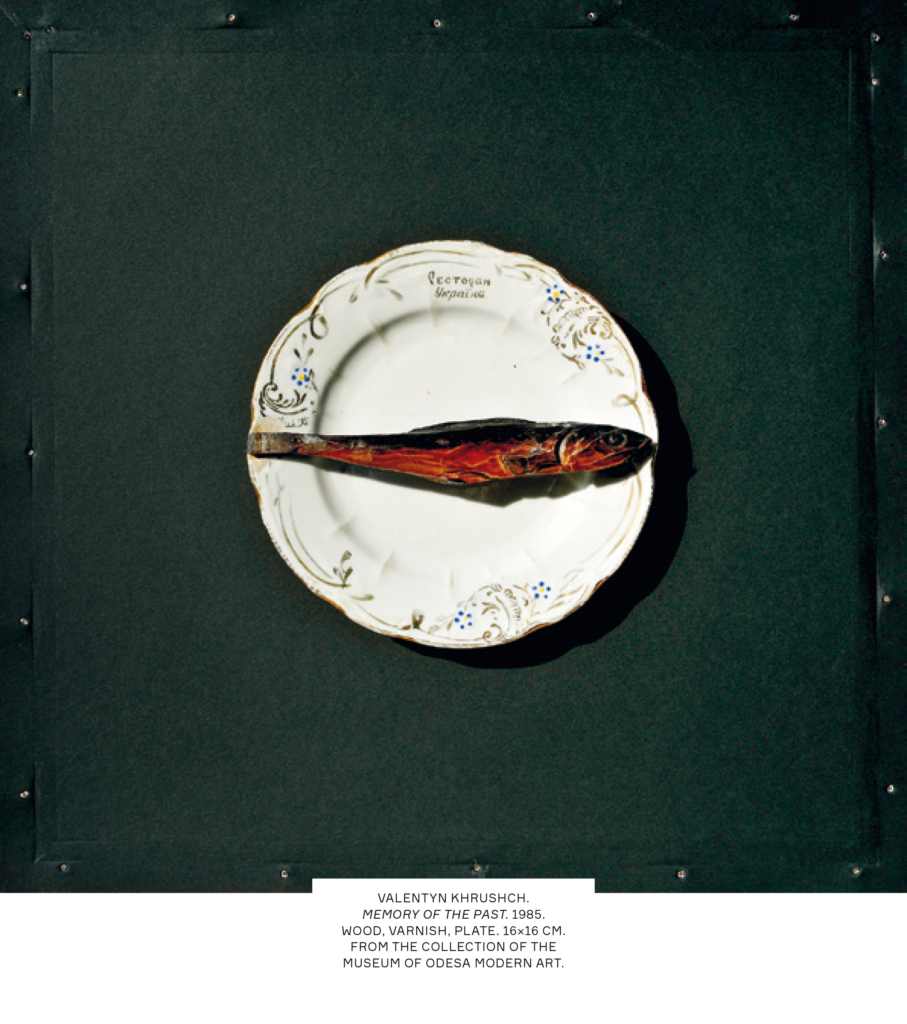 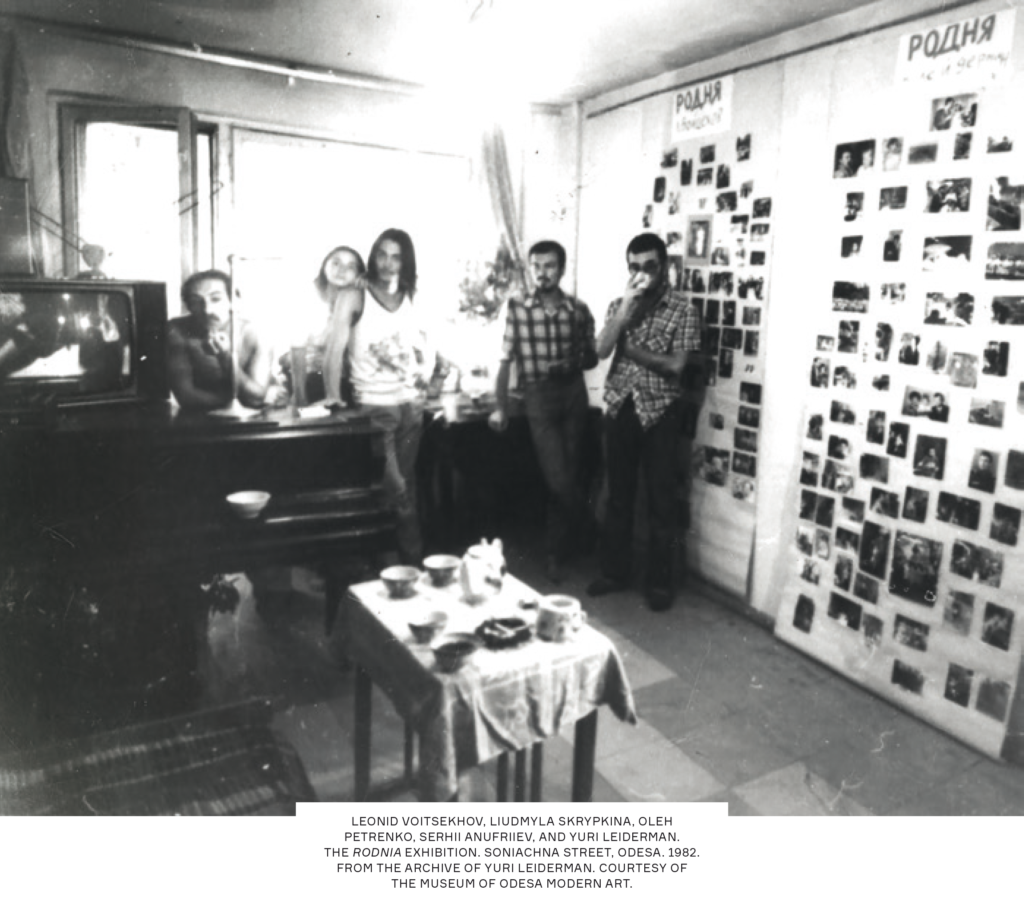 Among their first collaborative projects, initiated by Voitsekhov, was the apartment exhibition Rodnia [Kin] in 1983. It was put on in the home of Serhii Anufriiev’s mother Marharyta Zharkova. It was here in this famous “salon,” in reality a standard Soviet apartment on Soniachna Street, that the older members of Odesan bohemian life would gather. Rodnia took up the entire wall of one of the rooms, covered in photographs from the personal family archives of the exhibition participants. All attendees were told in advance that they would be witnessing artwork completed “using new techniques.” In reality, once the guests had arrived at the apartment on Soniachna Street, they ended up having to listen to the artists give long and detailed explanations for each photograph: about somebody’s grandmother and where she lived; about who studied with whom; and about who went on to get married. This was clearly an ironic statement on the familial atmosphere within the early 1980s unofficial Soviet art scene, whose cozy solidarity and constant bickering resembled life in a communal apartment.

There was a glaring cultural vacuum in Kyiv at this time, and the main intellectual focus for the young Odesans became the Moscow conceptualist group. They discovered the work of the art group Kollektivnye deistviia [Collective Action], whose founder Andrei Monastyrsky was their idol, and they began gradually spending more and more time in Moscow. One of the first to establish regular contact with the Moscow conceptualists was the affable and charming Serhii Anufriiev, the son of the Odesan nonconformist from the previous generation, Oleksandr Anufriiev. Yuri Leiderman went to study at the Moscow Institute of Chemical Technology. This generation of Odesans was, on the whole, not interested in professional art education — the conservative Soviet art colleges had nothing to offer them. A certainty hung in the air at that time that anybody could become an artist, and the main thing was not how art was made, but rather what it was about. This particular artistic culture, like that of Moscow, was originally paper-based and mainly focused on text and discourse, rather than being centered on the image.

The poet Ihor Chatskin, the author of the first conceptual painting in Ukrainian art, I Ruble Ihor Chatskin, would later recall how news from the capital’s art scene traveled to Odesa:

Monastyrsky’s writings were hugely influential when they arrived; rumor was, too, of course. Actually, I think that rumors were an important and completely separate thing. They were varied and often fantastical. Seriozha [Serhii] Anufriiev, who heard most of the rumors, had an amazing ability to embellish what he had heard and often make things up. I remember a fantastic story about Vadyk Zakharov. Anufriiev was talking about some work or other by Vadyk Zakharov. The work featured Vadyk with his eyes closed, bound shut (he has a pretty well-known series like that). He had begun working with Skersis, and this is what he did: he had his eyes tied shut with a sign above him saying: “Piracy is good.” Somehow, Seriozha managed to interpret that as “Fascism is what we need now.” That is the only example I can fully remember, but there were a thousand instances like it. While the overall situation resembled a “game of telephone,” there was the fairly objective magazine A-Ia [A–Z], and Monastyrsky’s writings, bewitching, magical texts which we didn’t always understand. He was some kind of shaman or something. 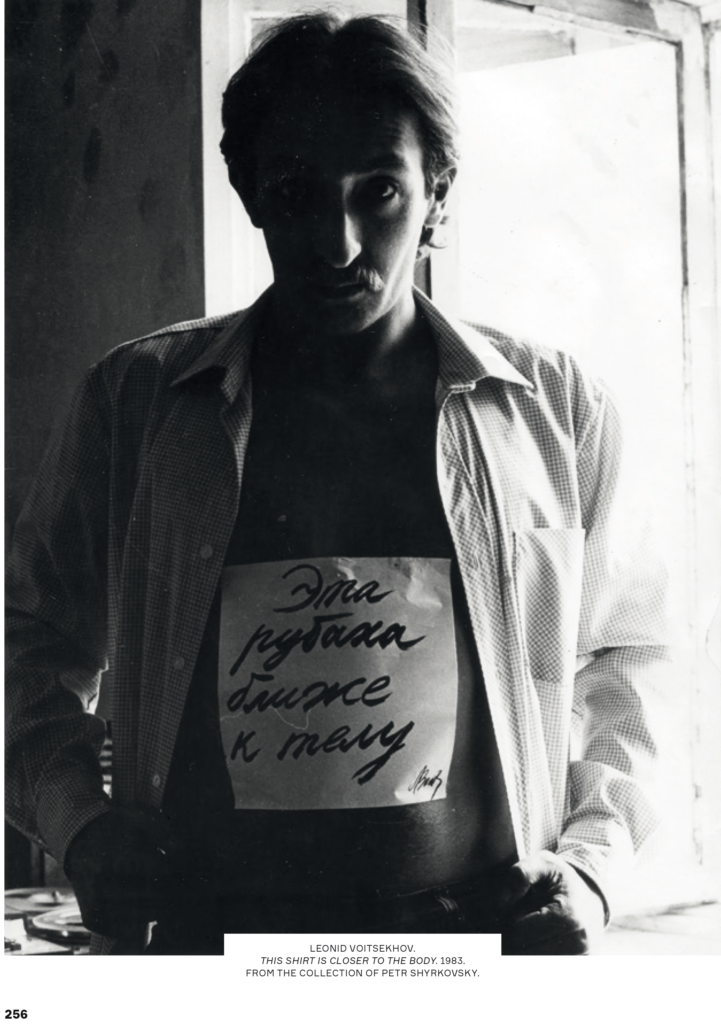 And Odesa wouldn’t be Odesa if it didn’t bring its own rebellious spirit to Soviet unofficial art. Connecting the unconnectable; ironically distorting ideological clichés; subversively appropriating the day-to-day features of late-Soviet life; combining a childishness and intelligence; while also binding all of these things together into a kind of poetry — these were all ingredients of the Odesa recipe for conceptualism. When looking at the art of many Odesans from this period, it is difficult to separate the figure of the artist from their work. Serhii Anufriiev and Leonid Voitsekhov are examples of this. Both of them are highly important representatives of Odesa conceptualism, but at the same time it is hard to pinpoint their artistic contribution to a specific piece of art, whether it be text, a series, or project. Of course, both of them had their own particular trademarks, but above all else they were charismatic communicators, and the unique atmosphere of the Odesa art scene in the 1980s wouldn’t have been possible without them.

Another stand-out figure from this period was Yuri Leiderman. A thoughtful and intellectual man who loved reading complicated texts, he was also a poetically minded, romantic, and ironic observer. The most interesting stage in the history of this group was at the end of the 1980s, that incredibly important time in art, when the Odesa artists squatted on the street Furmannyi Pereulok and in the Chistye Prudy neighborhood in Moscow.

In 1987, Leiderman and Anufriiev, together with the Moscow artist Pavel Pepperstein, created the art group Inspection Medical Hermeneutics. This collective became the brightest phenomenon in the later years of Moscow conceptualism. In the best tradition of schizoanalysis, while also appropriating the language of secret orders and lodges, the artists called themselves “inspectors.” They organized meetings and composed intentionally complicated texts. They wrote using an Aesopian language, which could be interpreted as an ironic commentary on the characteristically impenetrable nature of the Moscow art scene at that time. However, they were not simply playing intellectual games. In many ways, these unique compositions helped define the period, and quotations from their work, which were full of poetic neologisms, spread like wildfire.

Another original aspect of the Odesan art scene of the 1980s was two art groups, each comprised of a married couple. The Pertsi [Peppers] group (Liudmyla Skrypkina and Oleh Petrenko) and the Martynchyky group (Svitlana Martynchyk and Ihor Stepin). The most famous artworks by Pertsi were made in 1985 and consisted of a unique surrealism with its roots in communal life. It was made up of absurd objects which combined banal features from Soviet everyday life with elements of scientific-technical discourse. In this way they created a teapot with boiling green peas; paintings on handkerchiefs; and domestic appliances covered in all manner of mathematical tables. 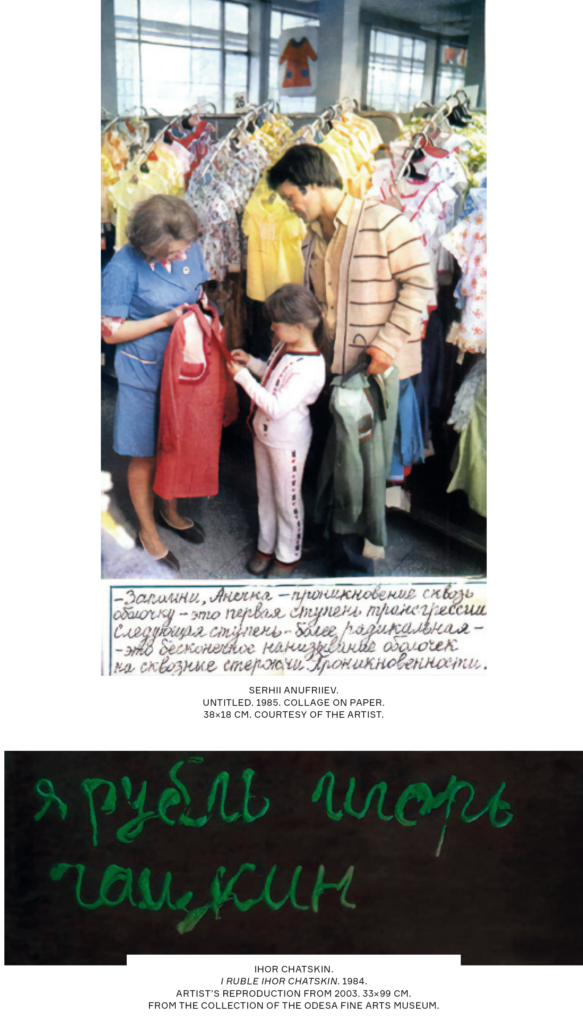 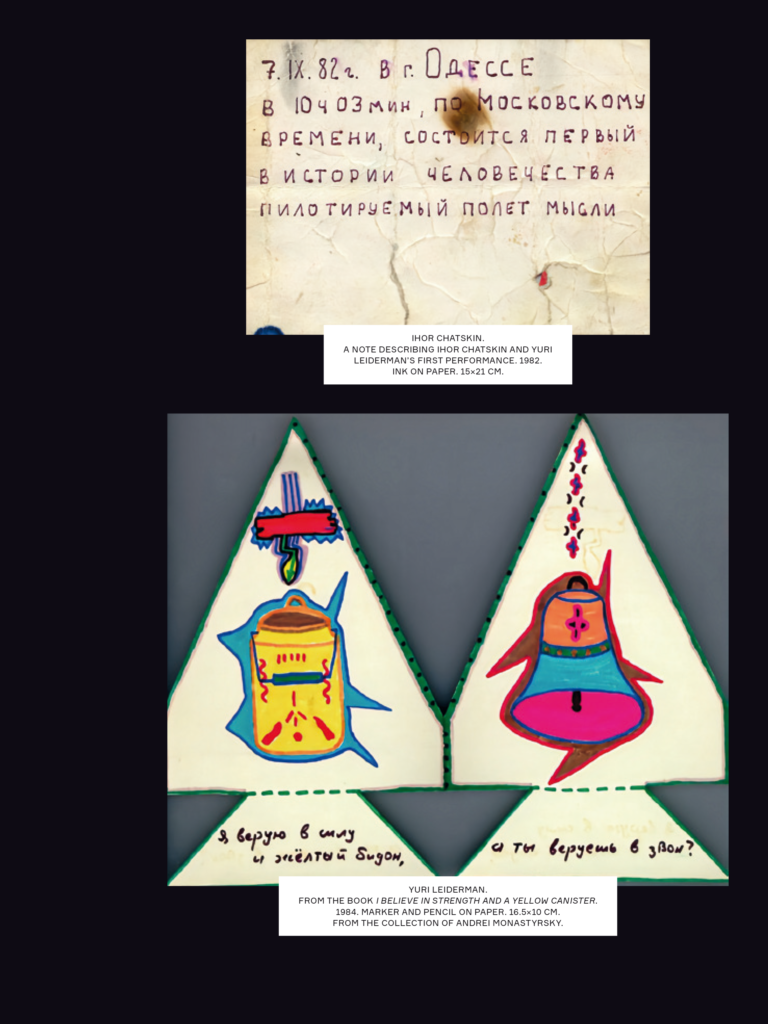 The second pair, the Martynchyky, existed on the edge of the Odesan scene; they were on friendly terms with the artists and their art had some mutual overlap. This pair’s art focused on an imagined mythology of their own creation which they continued to develop in a humorous manner over an extended time period. Their imagined “primitive” tribes and peoples, their ways of life, and histories, were all realized in the form of paintings, drawings and objects. Perhaps the Martynchyky’s most famous pieces are their plasticine installations where the sense of childishness is emphasized through their choice of material which is traditionally used in children’s crafts.

The performances staged by the Odesans were another landmark in the history of Ukrainian art: Exploring the Artistic Wilds (1987), In No Time (1987), and many. These were stand out moments in the history of Soviet performance. Leiderman and Ihor Chatskin’s 1984 performance entitled Ways to Use a Flag as a Murder Weapon was an iconic statement on Soviet reality, which has not lost its relevance even to this day. To a certain extent, the performance could serve as an eloquent epigraph for Ukraine’s most recent history with its unceasing political strife and conflict.

Following the turbulent 1980s, many of the Odesa conceptualists remained permanently in Moscow and some left for the West, but the majority either returned to Odesa or at least maintained a close connection with the city. Recently, Ukraine has seen a surge in interest towards the Odesa art scene of the 1980s and a reassessment of its role and influence. Today it is evident that Odesa conceptualism is an integral part of the history of Ukrainian art and constitutes one of its brightest chapters. 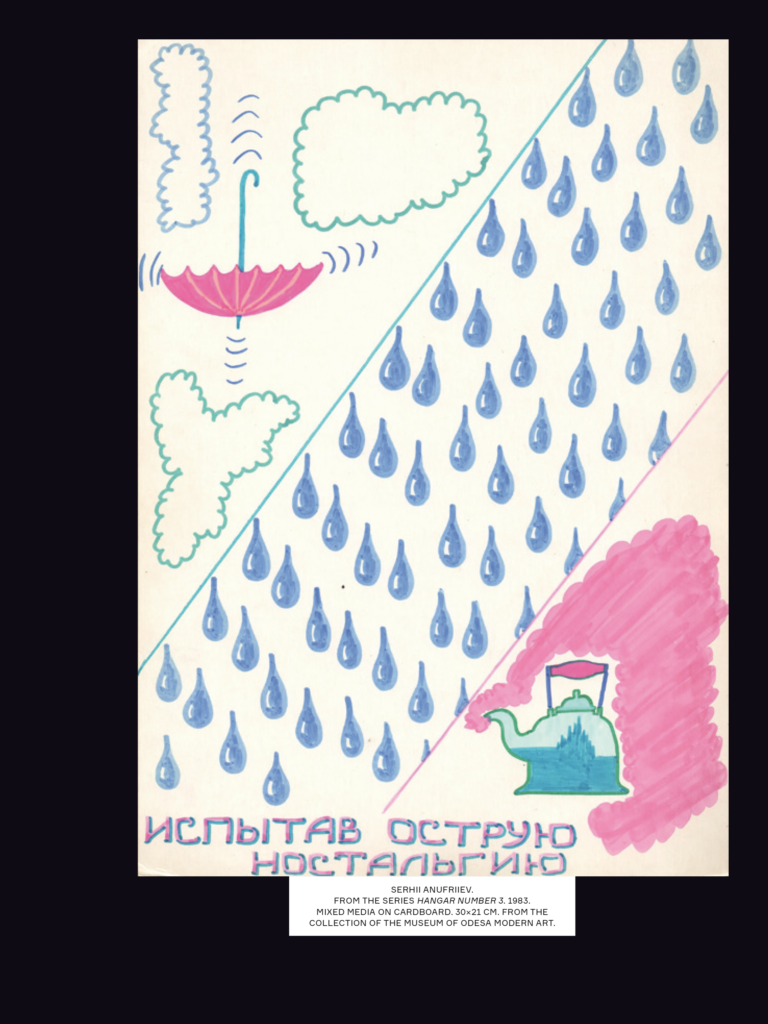 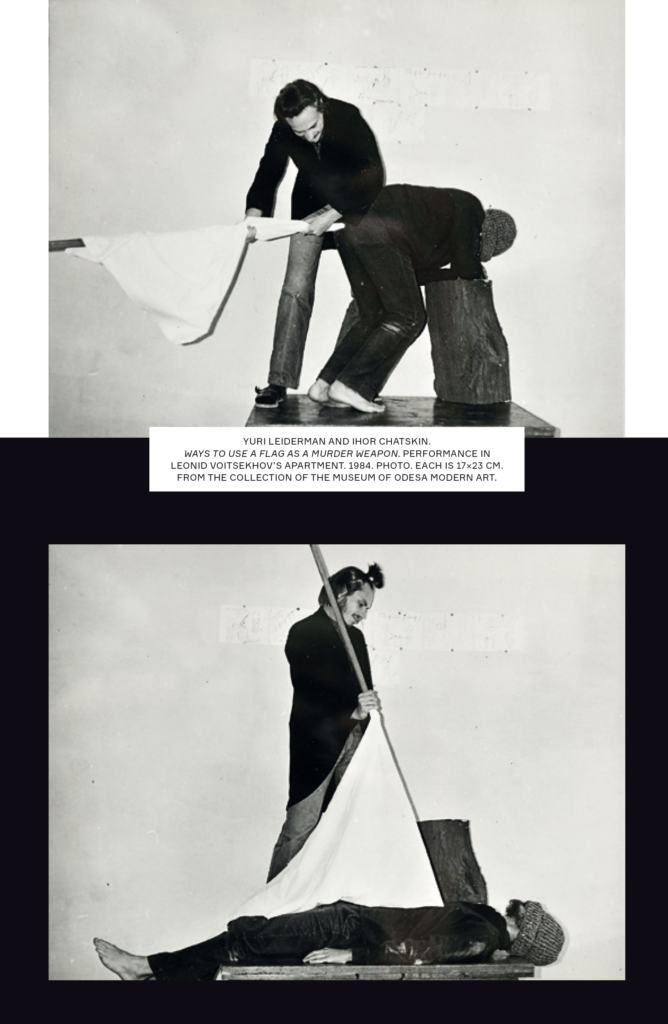 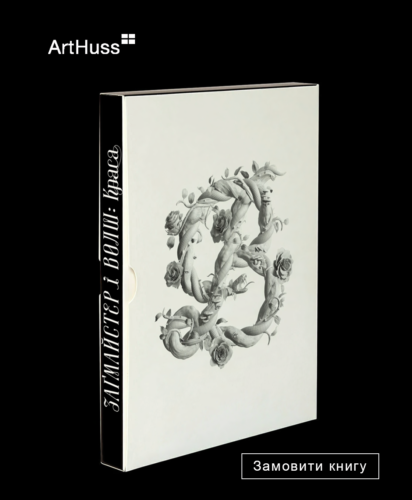 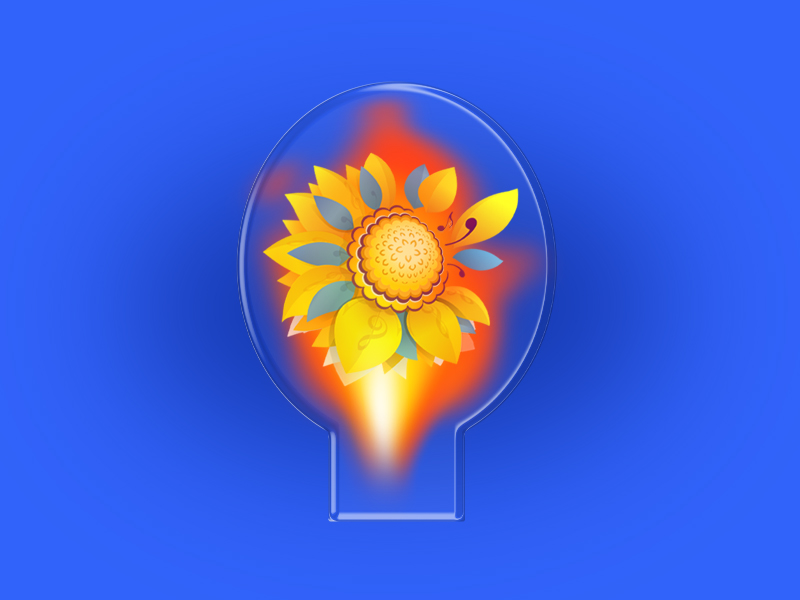 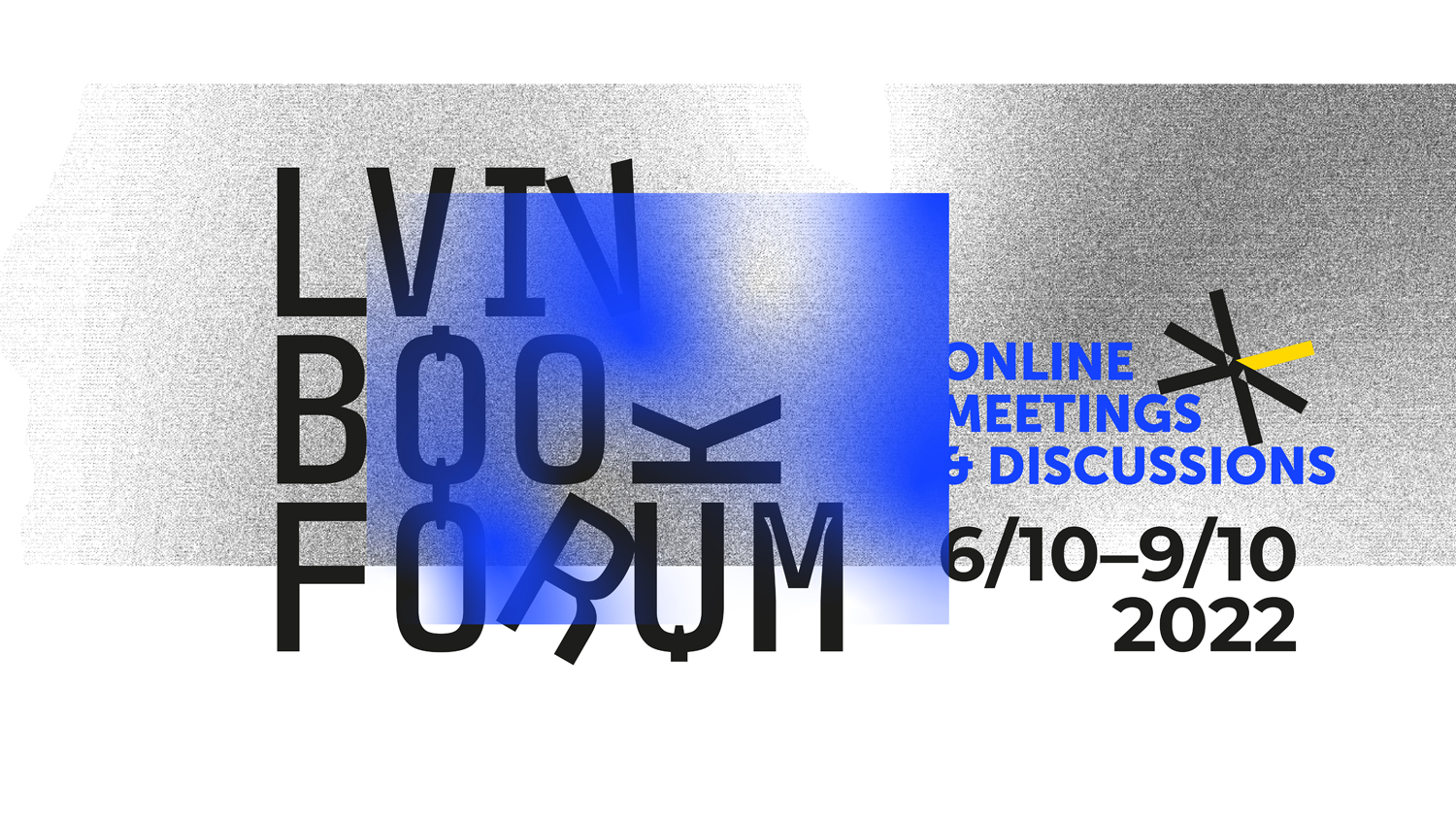 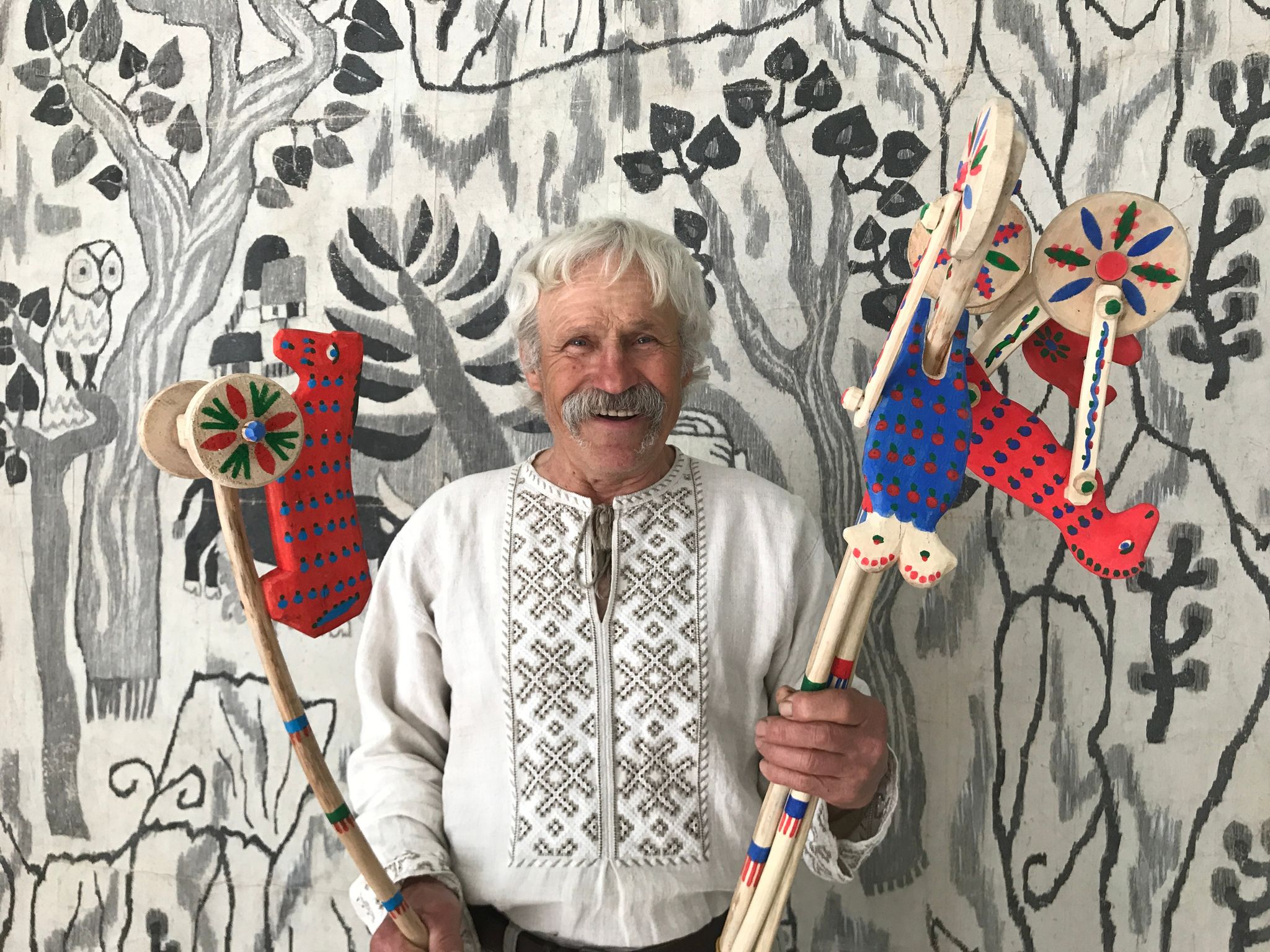 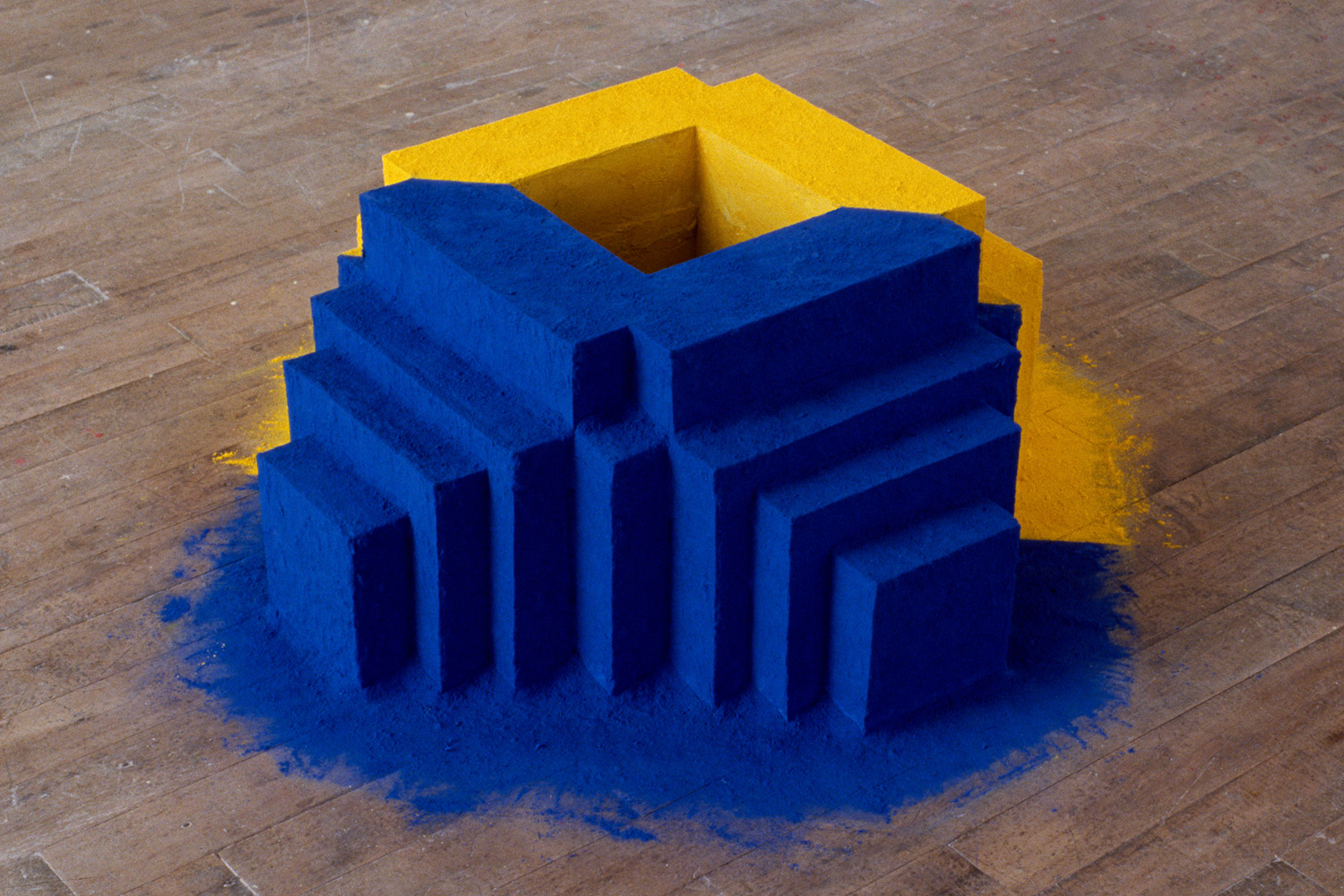